ARLINGTON, Texas, May 4, 2017 /PRNewswire/ -- Loews Hotels & Co., The Cordish Companies, and the Texas Rangers announced their vision today for the hotel and convention center at Texas Live!, the $250 million world-class dining, entertainment and hospitality destination being developed in partnership between The Cordish Companies, Texas Rangers and City of Arlington in Arlington, TX. The new $150 million flagship hotel, Live! by Loews – Arlington, TX, will be the first of its kind in the country, providing guests an unprecedented upscale experience that blends sports and entertainment with first-class hospitality and superior amenities. Texas Live!, anchored by Live! by Loews, is a part of a $4 billion vision for the Arlington Entertainment District that includes the Rangers new $1 billion ballpark and preservation of Globe Life Park. Ideally positioned between the Texas Rangers' Globe Life Park and the Dallas Cowboys' AT&T Stadium, the project will become a resort-style destination for sports fans, visitors, and families, as well as a spectacular location for meetings, special events and conventions. 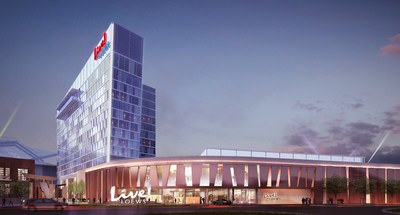 "The Cordish Companies and the Texas Rangers are two world-class organizations with an incredible vision for the Arlington Entertainment District that is highlighted by their commitment to quality of design and architecture," stated Jonathan Tisch, Chairman and CEO of Loews Hotels & Co. "This partnership allows us the opportunity to bring Loews Hotels back to Texas after a more than 20 year hiatus and presents what we plan is the first of several new hotels under the Live! by Loews partner brand."

Welcoming guests for nearly six decades, Loews Hotels & Co.'s core brand, Loews Hotels, has become a leader in distinctive hotels that cater to meetings and groups, business, leisure, and family travelers in key urban and resort destinations throughout the United States and Canada. The Cordish Companies' Live! brand, one of the premier entertainment brands in the country, welcomes over 50 million annual visitors to its Live! Districts which are among the highest profile dining, entertainment and hospitality destinations in the country.  Together, these two powerhouses will provide a one-of-a-kind upscale destination for the City of Arlington and the Dallas Fort-Worth metroplex.

"Loews Hotels & Co. brings a first-class level of hospitality that is unmatched," stated Blake Cordish, Vice President of The Cordish Companies. "Live! by Loews will debut on one of the highest and most exciting platforms of sports and entertainment in the entire country. Live! by Loews is a major step forward in cementing Arlington as the premier entertainment destination in the State of Texas."

"An upscale hotel in the Entertainment District has long been a dream for Arlington and we couldn't be more excited to see that dream become a reality with the addition of a Loews branded hotel," said Arlington Mayor Jeff Williams. "With this announcement, we have just combined three world-class businesses with a world-class destination. This is a home run for Arlington and its residents and visitors."

Designed by internationally-acclaimed HKS Architects, the 14-story tall contemporary glass tower will feature 302 luxury guestrooms, including 26 suites, with floor to ceiling glass windows that show off incredible, expansive views of the entertainment district from each room. The iconic tower will feature several unique resort-style spaces and amenities for guests to enjoy both day and night including:

"Live! by Loews will anchor Texas Live! as one of the premier entertainment, hospitality and event destinations in the country," stated Rob Matwick, Executive Vice President of Business Operations for the Texas Rangers. "We are very excited to announce our partnership with Loews Hotels and to unveil our vision for Texas Live! together with our development partners, The Cordish Companies."

Texas Live! is expected to create approximately 3,025 new jobs for the City of Arlington and Tarrant County, including 2,000 construction jobs and 1,025 permanent jobs, along with numerous vendor opportunities for local, minority, women and veteran-owned businesses. The dining and entertainment space in the district will open in 2018, with Live! by Loews scheduled to open in 2019. For more information, please visitwww.texas-live.com.

About Loews Hotels & Co.
Established 1960
Headquartered in New York City, Loews Hotels & Co. hospitality company is rooted in deep heritage in the hotel industry and excellence in service. The hospitality group encompasses branded independent Loews Hotels, and a solid mix of partner-brand hotels. Loews Hotels & Co. owns and/or operates 24 hotels and resorts across the U.S. and Canada, including Hotel 1000 in downtown Seattle and the Loews Sapphire Falls Resort at Universal Orlando, the fifth hotel in partnership with Comcast NBC Universal. Located in major city centers and resort destinations from coast to coast, the Loews Hotels portfolio features properties grounded in family heritage and dedicated delivering unscripted guest moments all with a handcrafted approach. For reservations or more information about Loews Hotels, call 1-800-23-LOEWS or visit: www.loewshotels.com.

About the Texas Rangers
Entering their 46th season in Arlington, the Texas Rangers play in Major League Baseball's American League West Division. The Rangers own seven A.L. West Division titles (1996; 1998; 1999; 2010; 2011; 2015; 2016) and have advanced to postseason play in five of the last seven seasons. Texas has won at least 87 games in seven of the last eight years beginning 2009, the only Major League team to make that claim. A community leader, the Rangers, through the work of their Baseball Foundation, are dedicated to improving the lives of children in need and providing funding for youth in crisis, youth health initiatives, youth baseball programs, and youth education. Celebrating its 26th year, the Foundation has given back more than $15 million to help children in need.