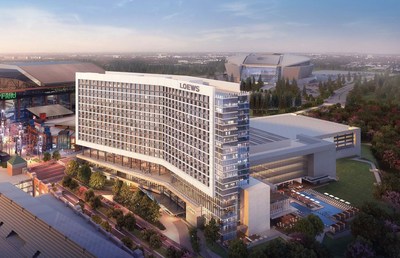 Tuesday evening, the Arlington City Council entered into a public-private partnership over a 30-year period to facilitate the transformative development project, which will further strengthen Arlington's convention and tourism opportunities and create new revenue, housing and jobs for the community. The expansion is a continuation of the strong public-private partnership between the City of Arlington, the Texas Rangers, Loews Hotels & Co, a wholly owned subsidiary of Loews Corporation (NYSE: L), and The Cordish Companies.

The components of the expansion will consist of:

The expansion would bring these partners' total investment in Arlington, which includes the new Texas Live! and Live! by Loews – Arlington Hotel, to more than $1 billion.

"It's another great day in Arlington, as we continue to build on the economic momentum in our world-class Entertainment District," said Arlington Mayor Jeff Williams. "When Loews Hotels & Co, The Cordish Companies, the Texas Rangers and the City of Arlington all come together on a project, there's no limit to the dreams we can realize here in The American Dream City. This project and the recent National Medal of Honor Museum will add significantly to the city's sales tax revenue, allow us to continue to keep our taxes among the lowest in the area and provide the quality services our residents have come to expect with minimal public investment."

This expansion is the next phase of a greater $4 billion vision by the City of Arlington, Texas Rangers, The Cordish Companies and Loews Hotels & Co that began with the $250 million Texas Live!, which opened August 2018, and Live! by Loews Hotel which opened in August 2019. Together, along with the Rangers' new Globe Life Field, the total investment of new development by the partnership totals over $2.25 billion. The new mixed-use project will be a major economic engine to the area and is expected to generate approximately $1.8 billion in economic benefits to Arlington and Tarrant County.

"As an owner and operator, Loews Hotels has the advantage of deciding when and where we build hotels. For us to invest significant capital in the new $550 million Loews Arlington Hotel, demonstrates our belief in the great city of Arlington, Texas," said Jonathan Tisch, chairman & CEO, Loews Hotels & Co. "We look forward to continuing our partnership with the City, The Texas Rangers and The Cordish Companies, and are confident that with the addition of Loews Arlington, the destination will receive national prominence and recognition for hotels and lodging as AT&T Stadium and Globe Life Field did for sports and entertainment."

"The Texas Rangers are proud to call Arlington our home as the city and its leaders continue to create one of the nation's premier sports and entertainment destinations," said Texas Rangers Co-Chairman and Managing Partner Ray Davis. "We want to thank our great partners, Loews Hotels & Co and The Cordish Companies for sharing our vision for the Arlington Entertainment District. With its opening next March, Globe Life Field will be the finest ballpark in Major League Baseball, and the development projects announced this evening are another very exciting addition to the area."

"It is an honor for The Cordish Companies to continue our partnership with the City of Arlington, the Texas Rangers and Loews Hotels & Co to deliver a transformative project for Arlington," said Blake Cordish, principal of The Cordish Companies. "Loews is one of the preeminent hoteliers in North America and a leader in the convention and meetings industry. The expansion of Arlington's Entertainment District, anchored by the new Loews Arlington Hotel and Arlington Convention Center, will create a vibrant mixed-use development and will cement Arlington as one of the leading premier sports, entertainment, culture, hospitality and tourism destinations in the country."

Corporate Office Headquarters
The City of Arlington, the Texas Rangers and The Cordish Companies announced their vision for a 200,000-square-foot corporate headquarters building to include a Class A office tower in the Arlington Entertainment District.

Mixed-Use Residential Building
Located next to Texas Live! and the soon-to-open Globe Life Field, a mixed-use residential building will create one of the most unique lifestyle experiences in the country. The 280-unit building, which will overlook the Texas Rangers North Plaza, will offer residents an urban lifestyle in the heart of Arlington's Entertainment District. Leveraging The Cordish Companies' expertise in hospitality and entertainment, residents will enjoy one-of-a-kind amenities and services on par with the finest upscale residences in the United States. Additionally, the building will feature new retail space and a new public garage with 1,900 parking spaces.

Retail, Entertainment and Small Business Coworking/Incubator Space
The expansion of the Entertainment District will also include 100,000 square feet of first-class retail and entertainment space, as well as a small business coworking and incubator space – Spark. Spark will support the growing Arlington and North Texas entrepreneurial community, placing members within close proximity to hundreds of successful businesses, dining and hotel options, and entertainment.

Spark launched its initial venue in the heart of Baltimore's Inner Harbor in 2016, undergoing four expansions in its first four years. Today, Spark Baltimore supports more than 165 companies and 470 individual members. Representing a diverse community of entrepreneurial industries, Spark Baltimore has been lauded by city and state officials as being an important asset to Baltimore's Central Business District and an entrepreneurial hub for the city of Baltimore and the state of Maryland. Spark will open in Arlington with the same commitment to become an integral part of the entrepreneurial ecosystem of the city and region, providing first-class amenities to its members.

MAXIMIZING COMMUNITY BENEFITS FOR TARRANT COUNTY, CITY OF ARLINGTON AND ITS RESIDENTS

Construction will commence in the first quarter of 2020 beginning with the first 1,500-space parking garage on the west side of Lot J, which will be connected to the new Loews Arlington Hotel.

About the City of Arlington, TX
Arlington is The American Dream City because our competitive, can-do spirit makes dreams a reality. Arlington, Texas strives to increase city tax revenues and improve quality of life through business recruitment, retention, expansion, and the development of public-private partnerships. Since 2015, the office has had more than $2.2 billion in deals, making it a leader among North Texas economic development agencies. Recent notable deals include the National Medal of Honor Museum, Six Flags' World Headquarters, the Texas Rangers' new $1.2 billion Globe Life Field, UPS's largest distribution center in North Texas, the 200,000 square-foot Texas Live! Entertainment complex, and the $150 million, Live! by Loews – Arlington, TX Hotel. You can follow the City of Arlington on Facebook, Twitter, Instagram, LinkedIn, YouTube or visit the City's website for the latest news and information.

About the Texas Rangers
The Texas Rangers will celebrate their 49th season in Arlington, Texas in 2020. The team will have a new home next season at Globe Life Field, a state-of-the-art multipurpose sports and entertainment venue that includes a retractable roof for climate control and shelter for fans during the hot summer months. The Rangers, who have advanced to postseason play five times in the last ten years, have won seven American League West Division titles and were the A.L. Champions in 2010 and 2011. The franchise has featured numerous iconic players including Hall of Famers Ivan Rodriguez and Nolan Ryan. The Texas Rangers Baseball Foundation is dedicated to improving the lives of children in need in the community and since 1991, has invested more than $30 million in funding for children, the military and first responders and their families, educational, health, and athletic programming and partnerships.

About Loews Hotels & Co
Established 1960
Headquartered in New York City, Loews Hotels & Co is rooted in deep heritage and excellence in service. The hospitality company encompasses branded independent Loews Hotels, and a solid mix of partner-brand hotels. Loews Hotels & Co owns and/or operates 27 hotels and resorts across the U.S. and Canada, including the new Live! by Loews – Arlington, TX and Universal's Surfside Inn and Suites, the seventh hotel in partnership with Comcast NBC Universal, which opened earlier this year. Located in major city centers and resort destinations from coast to coast, the Loews Hotels portfolio features properties grounded in family heritage and dedicated to delivering unscripted guest moments with a handcrafted approach. For reservations or more information about Loews Hotels, call 1-800-23-LOEWS or visit: www.loewshotels.com.